The fall cross country season is a big deal for the Village of Lake Lenore.

The small rural community roughly 150 kilometres east of Saskatoon has only one school, which welcomes students from Kindergarten to Grade 12. Students can participate in cross country when they reach Grade 5 — and they come out in droves.

This year, more than a quarter of Lake Lenore School’s 91 students — including nine of the 20 high schoolers — competed in cross country. The team wrapped up its season last month with bronze at the Saskatchewan High Schools Athletic Association Cross Country provincials in the 1A division, which encompasses the province’s smallest schools. It is the school’s 11th consecutive podium finish.

“We have a running culture here and we’ve just been able to maintain it,” says Curtis Strueby, who has coached the team alongside Naomie Prodahl for the last 16 years. “We really push the multi-sport athletes in our school. Our kids do everything. They run cross country, they play soccer, they play volleyball, they play basketball, they do track and field, and then play hockey and a lot of them play baseball as well. They’re just great, well-rounded athletes.”

When Strueby and Prodahl took over the team in 2006, Lake Lenore School was a bit more crowded with roughly 160 students. The cross country team was well established, but the team wasn’t often reaching the podium in the 1A division. Strueby and Prodahl encouraged students to think about cross country as conditioning for other sports and a way to improve mental health. They focused on fostering a “family-oriented culture” where students can talk openly with each other and enjoy fresh baked goods which Prodahl regularly brings to morning practices.

The number of team members slowly grew and healthy competition with strong teams in neighbouring communities of Muenster, Middle Lake and Annaheim spurred athletes to want to be better. Then, in 2011, Lake Lenore School won silver in the provincials 1A division and interest in the sport exploded.

“Once students saw that, they wanted to be part of it too,” Strueby recalls. “It just kind of took off.”

Students in grades 9 to 12 qualify for provincials if they place well enough in district meets. At provincials, schools get points for how their runners place (one point for first place, two points for second and so on). Points from schools’ four best placing runners across all races are added up and the school with the lowest score wins.

From 2012 to 2016, Lake Lenore School took home gold in the provincial 1A championships with scores in the 30s, 40s and 50s that rivalled those of much larger schools. It wasn’t uncommon for half the school’s high school students to be competing in provincials.

“It was genuine excitement. The kids just really bought in … it was just a really positive time,” Streuby says.

These days, the student population and cross country team are smaller and point totals haven’t been as low (six Lake Lenore athletes qualified for provincials this year and the team won bronze this year with 186 points), but Strueby is no less excited about the team’s performance. This year, he is particularly thrilled for the young runners who ran the best races of their lives in provincials.

“We’re so proud of these kids the last few years that are sticking with it,” he says. “The kids that are doing cross country today, it’s a tougher thing than it was seven or eight years ago because that’s when everyone was doing it and it was the cool thing to do. These kids are coming out and putting out as good an effort as any of the teams we’ve had.”

The school will have a small high school group next year, but then numbers will slowly swell as larger classes in younger grades move ahead. Many younger students are already showing interest in cross country and Strueby is excited for the school to continue punching above its weight in provincial competitions.

“I may be biased, but I think you might see that again (that we’ll be on top of the podium),” Strueby says. “Who knows? Anything can happen.”

‘Like taming and petting a hurricane;’ Why these pace bunnies love their job
Community, Running / January 31, 2023 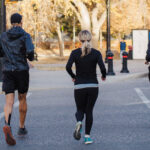 Want to get the latest from Brainsport – don’t miss out, sign up now for the Brainsport Times.